Get Up To 95% Off Today! Checkout Deals of the Day on Amazon

From the inventors of the famous Swiss Army knife comes a line of fine kitchen tools designed for accomplished and aspiring chefs at work or in the home. Each blade from the stamped line of cutlery is expertly made in Switzerland from high-carbon stainless steel and undergoes a special tempering process for an edge that can be resharpened again and again. The result is a knife that can keep its original sharpness throughout the entire life of the blade. Each blade is conical ground throughout its length and depth, which results in a wider break point with less risk of the blade breaking and less resistance for easier cutting, and then laser tested to ensure optimum cutting power and durability. The blades are paired with classic, beautiful rosewood handles riveted for durability and designed to minimize wrist tension while offering a comfortable grip. The Victorinox stamped collection with rosewood handles is an extensive range with open-stock pieces as well as handy and versatile sets.

An excellent choice for most butchering work, the breaking knife is used to break down large quarters into smaller roasts and pieces. Its curved blade enhances the ease of a single pass cut in removing bones from flesh. Combined with Victorinox’s separately sold breaking, boning, and butchering knives, this tool can help complete a meat-lover’s heavy-duty collection. It makes a great gift for the home chef who already has everything else, or anyone looking to round out a collection. This 8-inch version is also available in a 10-inch model. All high-quality cutlery and kitchen tools should be washed by hand for best care, and Victorinox covers each piece with a lifetime warranty against manufacturer defects.

Who is Victorinox?
Although Victorinox is known the world over as the creator of the Original Swiss Army Knife, the company started out in 1884 as a cutlery workshop. By the time company creator Karl Elsener delivered his first pocket knife to the Swiss Army, his cutlery business was already booming. Over the next century, Victorinox cutlery became a top-rated choice among professionals worldwide, with over 300 blades to offer.

Victorinox knives have regularly appeared as highly ranked and recommended kitchen tools in Cook’s Illustrated, Men’s Health, The Cincinnati Enquirer, New York Magazine, and Natural Health, just to name a few. In 2009, the company announced a partnership with professional chef, Daniel Humm, of Eleven Madison Park in New York City. In addition, building on the success of its cutlery business, Victorinox has brought all the same quality and expertise to a wider range of products and accessories, including other kitchen tools, pocket tools, watches, luggage, and clothing.

Who is R.H. Forschner?
Victorinox had been a staple in European commercial cutlery for over 50 years when approached by New York’s R.H. Forschner, known since 1855 as a builder of scales for butchers, to be their sole cutlery supplier. The two companies joined forces in 1937, and R.H. Forschner subsequently became North America’s dominant professional brand, as ubiquitous in the bustling meatpacking plants of the Midwest as it is in the gleaming, four-star restaurant kitchens of Midtown Manhattan.

As a division of Victorinox/Swiss Army Brands, R.H. Forschner marketed cutlery under the brand name “RH Forschner by Victorinox” and distributed to the commercial, food service, and retail trade classes. That brand has been considered a top choice of professionals worldwide with over 300 styles of blades bearing the R.H. Forschner name. However, in 2009, in conjunction with Victorinox’s 125th anniversary, the company, Victorinox Swiss Army, Inc., has decided to remove the “RH Forschner” name from all blades. Blades thenceforth only include the “Victorinox” name.

What is a stamped blade?
A stamped knife can usually be identified by the absence of a bolster. Stamped blades are cut into their shapes from cold-rolled pieces of steel and then ground, tempered, and sharpened. Creating them requires many less steps than forging and results in lighter, narrower blades. Some professionals prefer the thicker, heavier forged blades, but many pros, who spend much of their day cutting and slicing, enjoy a lighter knife since it’s less fatiguing and easier to manipulate at speed.

Stamped knives are easier to produce and therefore less expensive. They perform very well and can approach the quality of a forged blade, but not the weight or feel. Victorinox manufactures a complete range of stamped blades with classic, beautiful Rosewood handles and they are considered among the greatest values in the knife industry.

What knives do I need to own?
Knife choice or selection is determined by many factors–size, function, style, and preference. The most important factor is function. Different knives have different uses. It is important to use the proper knife for a specific task, since proper knife selection and the use of a proper-sized, sharp knife make for safe cutting. General kitchen tasks and the knife to use for them are as follows:

Paring: The most common to own and use, a paring knife is generally for small cutting jobs and peeling of vegetables or fruit. The blade size is usually from three to four inches. Choose the shape and size to fit your hand. Since this is one of the more versatile knives, owning more than one is recommended.

Chef’s: The most important tool and essential to every cook, a chef‘s knife is most often used in a rocking method to mince, dice, and chop vegetables and herbs. This one is known as the chef’s best friend.

Slicer: Most commonly used to slice meats, poultry, and seafood, the slicer is an important companion to any host or hostess.

Boning: As its name suggests, a boning knife is used to trim or remove meat and fish from the bone.

Bread: Designed with a special edge, a bread knife makes easy work of cutting through crusty bread, pastries, or any item with a crust and a soft interior.

Fillet: Most often used by pros and seasoned home chefs, the fillet knife is used to fillet meat and fish.

Cleaver: An important addition to any collection, a cleaver is often used to cut or chop through bones.

Santoku: This knife combines the features of a cleaver with a chef’s knife. The curved blade helps the rocking motion used for chopping, and the wide blade works well for scooping sliced food off a cutting board and for crushing garlic. The santoku can also be used to slice meat and has a narrow spine for making thin cuts.

Utility: An all-purpose knife often referred to as a sandwich knife, the utility knife peels and slices fruits and vegetables, and even carves small meats.

Shaping: With its curved blade, a shaping knife is great for small precision cuts where control is essential, such as peeling, trimming, or garnishing.

What are the different knife edges and what do they do?
Straight: The vast majority of Victorinox knives come with a straight or fine edge. This means it has a perfect taper along the blade and no serrations. It is designed to cut without tearing or shredding.

Serrated: An edge designed with small, jagged teeth along the edge.

Scalloped: A blade with waves along the edge generally used to cut breads with a hard crust and soft interior, as well as tougher-skinned fruits and vegetables.

Granton: This edge has hollowed-out grooves or dimples on the sides of the blade. These grooves fill with the fat and juices of the product being cut, allowing for thin, even cuts without tearing. Even with the grooves, these are still straight-edge knives and can be honed with a sharpening steel.

How should I care for my cutlery?
After use, knives should not be allowed to soak in water. The best practice is to hand wash and dry them immediately. This is especially true if they have been used on fruit or salty foods, which may cause some staining, even on stainless steel. Most knives require very little maintenance and it is worth the effort to protect your investment.

Though Victorinox knives are dishwasher safe, this is strongly discouraged. The dishwasher’s agitation may cause damage. Additionally, harsh detergents can be harmful and cause pitting and spotting on the blades. The handles may also discolor and develop a white film with constant use of the dishwasher. Plus, intense heat associated with dishwashers is not good for the temper of the blade.

How do I keep my knives sharp?
All quality knives require proper maintenance to keep them in perfect cutting shape. The best of edges will quickly dull if it strikes metal, glass, or Formica. A wooden cutting board makes the best cutting surface. And, if a slip occurs, a proper cutting board is safer for the user. Frequent use of a Victorinox sharpening steel will keep blades in tip top working condition. All straight-edge knives need steeling to keep their edges.

How to “Steel” a Knife
1. Hold the steel firmly in your left hand with the guard positioned to stop the blade should it slip.
2. Hold the knife in your right hand and place on top part of steel as shown.
3. Raise back of blade one-eighth inch.
4. Now, moving the blade only, draw it across the steel in an arching curve, pivoted at your wrist. The blade tip should leave the steel about two-thirds of the way down.
5. Repeat the same action with the Blade on the bottom side of the steel. Always maintain the same pressure and angle on both sides of the steel.
6. Repeat five or six times.

When a sharpening steel no longer does the job, it’s time to take the knife to a qualified knife sharpener who will place a new edge on it. This, along with use of the sharpening steel, will give you many years of sharp, safe blades.

Please note that electric knife sharpeners can be harmful. They have to be used carefully as they remove too much metal, can harm the temper of the blade, and most important can change the factory-applied edge angle.

How should I store my knives?
Safety is the biggest concern of storage, both to the user and to protect the knife’s edge. Choices include a knife magnet, knife block, drawer insets, and also individual knife protectors. 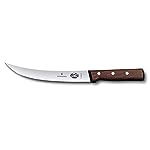