Spyderco is one of the leading knife production companies that are manufacturing knives for years with pride. Spyderco’s latest model was introduced to the market which is called Kapara. One of Australia’s part-time knife makers caught the attention of Spyderco company who initially designed the structure of the Kapara knife. The designer won the Best Folding Knife award in the 2012 Australian Guild show.

Spyderco Kapara was named after a venomous Redback spider that is typically found in Australia, New Zealand, and some other countries of South Asia. The design of the knife also includes the color combination of the spider. The spider has prominent red stripes on the side of its body, so Alistair Phillips, the creator of the knife also did put a red backspacer on the handle of the knife as a symbol. Phillips then uploaded the design on a website names ‘Voila”. After looking at his design on that website, Sal Glesser, the founder of Spyderco company wanted to purchase one of the knives for his personal collection, as he really liked the design. After meeting Phillips he came to know about all the details and he even liked more about Phillips’s creation. Glesser offered him a partnership for making knives, which Phillips couldn’t refuse.

Spyderco Kapara is one of the hardest and strongest knives on the market. With an attractive and sturdy design, it also offers safety and a high level of usability. In this point, we will be discussing the structure and the features that Spyderco Kapara carries and what possible benefit it can add to its functionality. 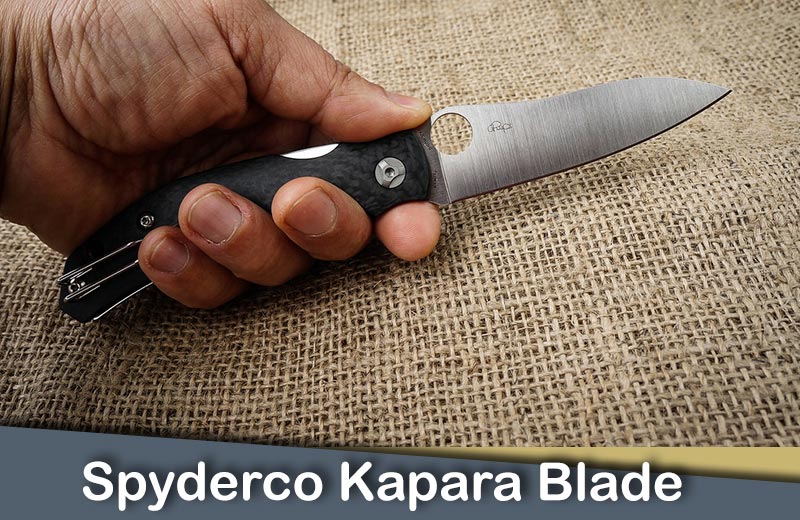 There is no denying the fact that the blade is the prime part of a knife or any cutting tool. Kapara is made of  3.58” long  CPM S30V stainless steel. The blade is very hard and adjusted to its rounded hole. There is a drop point that helps increase the overall length of the blade. The spine of the blade is  0.118” thick which is comparatively thinner. This well-rounded steel is pretty tough, well-built, and corrosion-resistant. 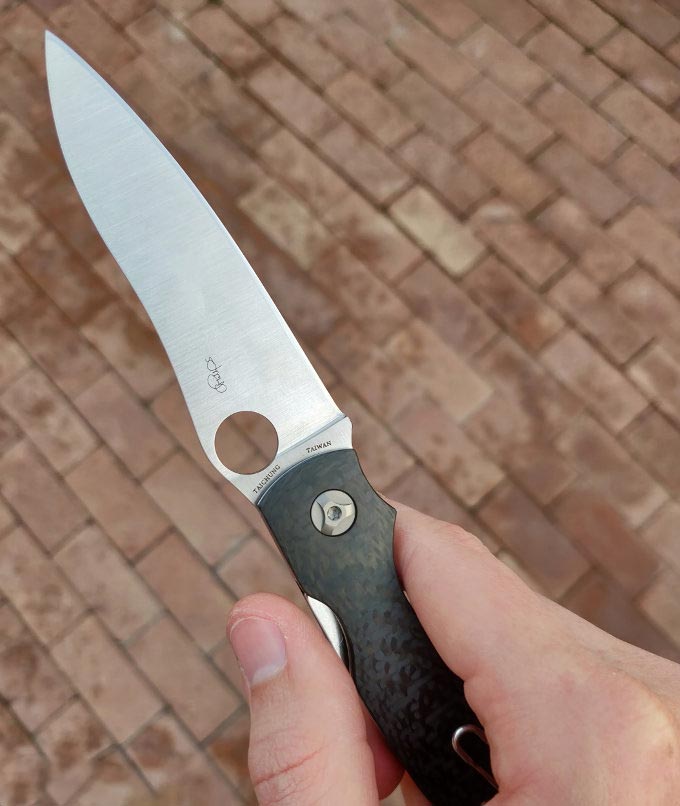 The handle of the Kapara folding knife is made of pure metal with stainless steel features. The liner is made of solid carbon fiber scale which is beautifully alined and has a great impact on the compression locking mechanism. The handle contains a finger choil on the edge for your index finder to have a comfortable grip. The structure of the handle has been designed suitably to increase the functionality and easiness of the locking mechanism. 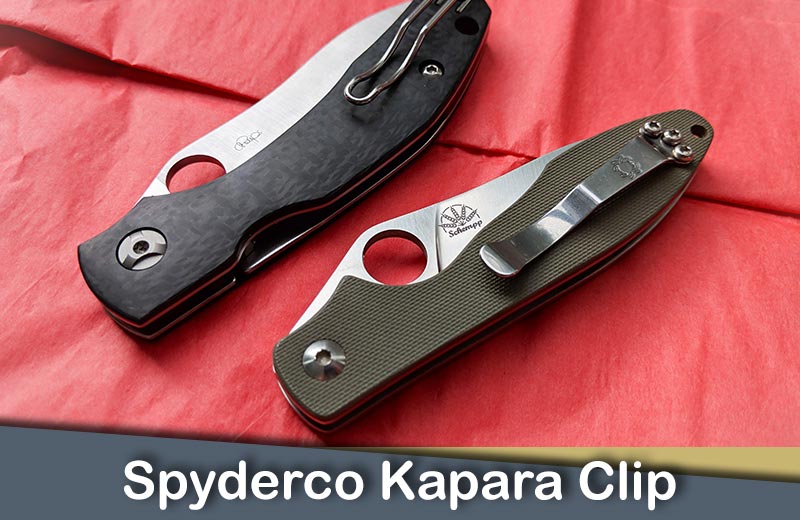 The Kapara folding pocket knife has a deep reversible wire clip. The clip has great importance to balance the weight of the knife and it’s also effective regarding the comfort of being carried. 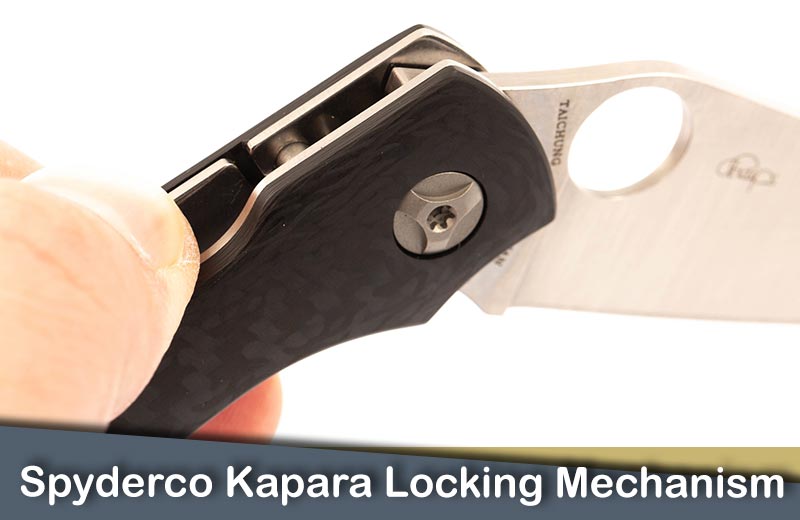 The Kapara includes a pivot bushing to its design. It is a collar that fits around the pivot barrel while providing the blade a fine lower friction surface during the rotation and make the work smoother and easier. The locking mechanism of Kapara is impressive. The compression locking mechanism is one of the most famous and endorsed ones in the knife world. Also, the lock is located in the spine of the handle, so you don’t have to put your finger in the closing path of the blade. It reduces the chances of accidents.

Spyderco Kapara was manufactured in Taiwan and is considered to be one of the best knives for its stunning finishing. Everything in this knife is perfectly designed, placed, and finished at the proper angle. The screws are perfectly fitted into the handle line. The quality of the handle scales is on another level. With an outstanding pattern, these scales are made of solid carbon fiber.

Key Specifications At A Glance The Kapara 8.25 inches long knife is a perfect fit for your pocket. The weight it contains is relatively light, which is only 3.4 ounces. The carbon fiber handle and skeletonized line improve the functionality of the knife. The greatest thing about the Spyderco Kapara is that it has outstanding designs which are being copied by many other knife brands and they are also paying the royalties to this majestic knife brand. The handle provides a suitable grip. You won’t find a single difficulty to use the knife. The Kapara can never be used as an alternative to a kitchen knife, but the knife can do a remarkable job in terms of cutting something. There are a good number of differences between these two giant knife brands. The quality apart, we can differentiate them in usability, functionality, and design. The blade sharpness and the handle are also a matter of comparison. Here we have brought up an ultimate difference between Spyderco Kapara and PM2. These two knives have extreme competition on market and got the most amount of sales equally. As the Spydiechef is basically made for kitchen purposes the structure is quite different from the Spyderco. Hence, the price of Spydiechef is also higher than that of Kapara. Bench 940 is a classic knife that is much heavier than the Spyderco Kapara. The price is also higher for the high-quality material and steel is used in the knife. The most important thing is, Benchmade is twice the weight of Kapara and Spydiechef. So you might feel the knife is taking a place in your pocket while you might not feel the same in the case of the other knives on our list. Here is the ultimate difference. between Spyderco Kapara and Benchmade 940.

The majestic design of Kapara was introduced on the market in 2018. The designer Phillip was a pro knife designer who was working for friendly pocket knife design and Kapara really fits the bill here. The Kapara is a comfortable pocket knife with a lot of practical features while no in the high price range. Even though Spyderco Kapara is not the cheapest among the other models of Spyderco, but the features and functionalities really suit the price well. Let’s just confess that $200 is not a bad deal compared to the quality and the features that we just mentioned in the article.

Kapara came with high expectations regarding how well it would perform. Some of those expectations were met and some weren’t. Regardless, we’ll now take a closer look at its features and what you can expect from this pocketknife. I wanted to like the Spyderco Kapara. I really did. I love Spydercos, and I loved the shape and design of this knife. It was a bit outside of my usual “style” preferences for a knife, but I really loved the look. It was a knife that I thought would be a great addition to my collection. I even talked a friend into buying one a couple of months ago.